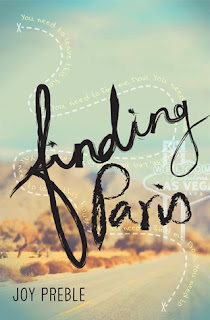 Sisters Leo and Paris Hollings have only ever had each other to rely on. They can't trust their mother, who hops from city to city and from guy to guy, or their gambler stepfather, who's moved them all to Las Vegas. It's just the two of them: Paris, who's always been the dreamer, and Leo, who has a real future in mind—going to Stanford, becoming a doctor, falling in love. But Leo isn't going anywhere right now, except driving around Vegas all night with her sister.

Until Paris ditches Leo at the Heartbreak Hotel Diner, where moments before they had been talking with physics student Max Sullivan. Outside, Leo finds a cryptic note from Paris—a clue. Is it some kind of game? Where is Paris, and why has she disappeared? When Leo reluctantly accepts Max's offer of help, the two find themselves following a string of clues through Vegas and beyond. But the search for the truth is not a straight line. And neither is the path to secrets Leo and Max hold inside.-Goodreads

Review: This book was all kinds of frustrating yet extremely readable. Let's get to the premise of the book. Paris ditches her younger sister at a diner in the middle of the night-WITHOUT A CELL PHONE, WALLET, MONEY OR KEYS-and leaves her a vague note saying:

Leo goes on a scavenger hunt of sorts around Vegas, with some random guy she met, trying to find her sister. Don't get me wrong, I love a good hunt, but it was very odd that Leo was worried something bad had happened to her sister when she was obviously well enough to leave her clues around town. I also didn't warm up to Paris (she was definitely a  unique personality). The big reveal at the end would have been more powerful if it hadn't been broadcasted so much throughout the book. I'll avoid spoilers but the author brought up some major, heavy stuff and I don't feel like it was fully addressed.

Now-all that being said, I love Preble's writing stuff and I found myself reading this in one sitting.
Grade: 3/5
Posted by Christine at 4:29 PM