At Her Own Risk 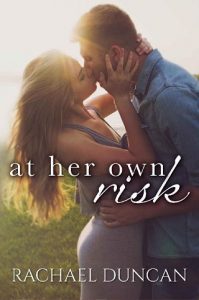 Book: At Her Own Risk
Author: Rachel Duncan

Sex.
That’s all it was supposed to be. No strings attached, no feelings, no heartache.
But if I thought Sean Riley would be content having only parts of me, I was dead wrong. His persistence wore me down and I found myself in the one situation I was trying to avoid.
Little does he know a life with me will lead to nothing but disappointment and heartbreak. He’s a good man and deserves everything I can’t give him. Not because I don’t want to, but because I’m unable.
Pushing him away in the beginning was to protect me, now I’m trying to protect him as I gear up for the fight of my life.
A fight I could lose.
Getting into a relationship was my risk, but as things get worse, I’m not the only one who will have something to lose.
I just hope it’s worth it.-Goodreads
Review:  Wow-this was a fabulous surprise.

I grab her wrist and pull her to me until she’s an inch from me. “I promise this is the best dumb decision you’ve ever made.”

Sean has been pursuing Paige for years with cheesy pickup lines. Paige doesn't do boyfriends but eventually, she gives into Sean's charms and they begin a 'sex only' relationship. Sean wants more, but he's willing to wait. What I thought would be a cute romance turned into a much more serious book. I loved Sean and Paige together! My only complaint was that Paige's reason for avoiding relationships was never very clear, other than she's been hurt in the past (seriously, Sean was so amazing, how she resisted him for so long is beyond me!). Turns out that while this isn't officially part of a series, there are 2 other books about Paige's friends. I will definitely be reading those and hopefully they provide more insight into Paige's prior relationships.