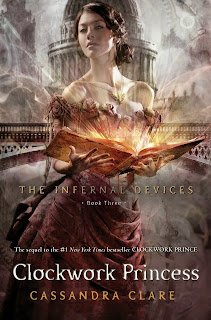 Tessa Gray should be happy – aren't all brides happy? Yet as she prepares for her wedding, a net of shadows begins to tighten around the Shaodwhunters of the London Institute.
A new demon appears, one linked by blood and secrecy to Mortmain, the man who plans to use his army of pitiless automatons, the Infernal Devices, to destroy the Shadowhunters. Mortmain needs only one last item to complete his plan. He needs Tessa. And Jem and Will, the boys who lay equal claim to Tessa's heart, will do anything to save her. -Goodreads

Review: After devouring book 2 in an almost non-stop reading session, I was so excited to read this. I was really expecting to LOVE it and unfortunately that didn't happen. I felt like I was reading a romance novel instead of the thrilling conclusion to this awesome trilogy. Most of the new characters that were introduced seemed to pair off and offered little to the plot.  A lot ink was devoted to Jem dying. At several points I kept thinking "Just die already so we can move on with the plot." The final showdown with the Magister was okay..I was just expecting something 'more.' Of course, I still loved Tessa, Will and several other characters. I think reading out how portals were created was fascinating. Overall, I liked the book but I think it could have been more exciting, however I HATED what the author did with the character of Jem at the end. HATED.

*Spoiler Alert*
Jem needed to die. Becoming a Silent Brother, after he said he would never do it, was just ridiculous. So Tessa ends up marrying Will and having this amazing life together (which we only read about in summary) and he dies. Years later (in the midst of the current MI timeline) a cure is found for Jem's illness and he is able to leave the Silent Brothers (although we're told it's a lifelong commitment) and he and Tessa re commence their relationship. Ugg. I had no problem with Jem in the books, although it was obvious Tessa and Will would end up together. Her relationship with Jem was more of a friendship that grew into love (nothing passionate). I just wish this section was not included. A friend of mine who read both series reminded me that we don't know what happens yet with Jem because as of the 5th MI book, he is still a Silent Brother. I hope Clare has some very clever reason why he leaves the brotherhood.

Anyway, even though this book was not perfect, I still liked it.