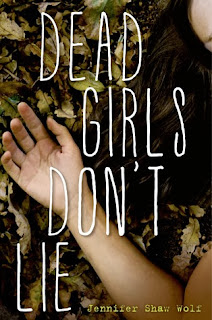 Review: Rachel died at two a.m . . . Three hours after Skyler kissed me for the first time. Forty-five minutes after she sent me her last text.
Jaycee and Rachel were best friends. But that was before. . .before that terrible night at the old house. Before Rachel shut Jaycee out. Before Jaycee chose Skyler over Rachel. Then Rachel is found dead. The police blame a growing gang problem in their small town, but Jaycee is sure it has to do with that night at the old house. Rachel’s text is the first clue—starting Jaycee on a search that leads to a shocking secret. Rachel’s death was no random crime, and Jaycee must figure out who to trust before she can expose the truth. - Goodreads

I think this is my first YA mystery and I wouldn't say I liked it exactly, but it was overall interesting. The setting was a small town in Washington state that seemed to be composed of white churchgoers and a Hispanic migrant population viewed with prejudice. Our protagonist is Jaycee, a follow the rules/goody two shoes type who lives with her strict and religious father. I found her boring and lacking in personality. Her decision to not involve the police in what she knew, seemed VERY out of character and her detective skills left something to be desired, but I thought the supporting characters were interesting. We had her religious father who is also the town attorney: does he know any town secrets? Why is he so protective? Seemingly superficial friends Claire and Taylor who put Rachel's death out of their minds in no time at all. Then there is Jaycee's new boyfriend Skyler and his older brothers that have all of a sudden taken an interest in Jaycee. Do they really like her or is something sinister at stake? Finally, Eduardo, a former gang member who Rachel tells Jaycee to trust.

The murderer was easy to figure out about mid-way through the book but Wolf did a good job making scenes creepy. I wish Eduardo was more prevalent in the story. He had a chip on his shoulder for most of the book and I wish he and Jaycee had operated more as a team. Another comment..even though this was a mystery I kept thinking 'My god, Jaycee is going to go absolutely wild when she is in college away from her father.'  He didn't even allow her to have the password to their family computer, she was 16!!